From The Encyclopedia of TaeKwon-Do, by General Choi, Hong Hi

To put it simply TaeKwon-Do  is a version of unarmed combat designed for the purpose of self-defense. It is more than just that, however. It is the scientific use of the body in the method of self-defense; a body that has gained the ultimate use of its facilities through physical and mental training.

It is a martial art that has no equal in either power or technique. Though it is a martial art, its discipline, technique and mental training are the mortar for building a strong sense of justice fortitude humility and resolve. It is this mental conditioning that separates the true practitioner from the sensationalist, content with mastering only the fighting aspects of the art.

This one of the reasons that Tae kwon-Do is called an art of self-defense. It also implies a way of thinking and life, particularly in instilling a concept and spirit of strict self-imposed discipline and an ideal of noble moral rearmament. The nearest description of it is almost a cult.

Translate literally “TAE” stands for jumping or flying, to kick or smash with the foot, “Kwon” denotes the fist-chiefly to punch or destroy with the hand or fist. “Do” means an art or way – the right way built and paved by the saints and sages in the past.

Thus taken collectively “Taekwon-Do” indicates the mental training and the techniques of unarmed combat for self-defense as well as health, involving the skilled application of punches, kicks, blocks and dodges with bare hands and feet to the rapid destruction of the moving opponent or opponents.

TaeKwon-Do  definitely enables the weak to possess a fine weapon together with confidence to defend him or herself and defeat the opponent as well. Of course, wrongly applied, TaeKwon-Do  can be a lethal weapon. Therefore mental training must always be stressed to prevent the student from misusing it.

As for women folk, they will undoubtedly find Tae kwon-do an invaluable asset in tackling and driving away “wolves”, so to speak. When one is informed of the many instances where frail women effectively protected themselves, they may sound unbelievable. But really, they have been able to do so because they are well versed in the art of self-defense.

The feats of Tae kwon-Do are great in number. To mention a few is probably pertinent: for instance, flying over a mounted motorcycle or eleven persons in line to attack a target with the foot; breaking an inch thick pine board places at a height of ten or eleven feet with the foot; breaking two pieces of red brick with an open hand or knife-hand; smashing seven or eight pieces of two inch thick pine board at a single blow with fist; attacking two targets with the same foot in succession while flying and so on.

To the layman in the street, such feats may sound impossible, but to the serious students of Tae kwon-Do and the exponents of this art, it is quite ordinary. Of course, by mastering this art it does not mean that you will be asked to acts of impossibility. Particularly if someone should challenge you to kill a wild bull with your bare hands. Therefore it is clear that equivalent demonstrations of such effective use of pure somatic force is not to be seen in other forms of physical combat technique.

Hours spent on training will not be wasted; for surely you will reap a rich reward in the form of speedy reactions and deadly blows to rain down upon your enemy or in any case to save life if and when a need arises. Even if TaeKwon-Do  is practiced for the sake of exercise alone, the enjoyment derived will justify the time invested and spent. As an exercise, it is equally suitable for the old and young, male and female.

Incessant training is essential to keep oneself in top form and physical condition, In training, all the muscles of the human body will be used. From the use of one’s muscles, it will be possible to harness all available power generated by every muscular contraction. It will then be necessary to deliver such power to the human target especially to where the most vulnerable points or vital spots of one’s opponent are located, in particular when the opponent is in motion, At this point it is necessary to remind the students of Tae kwon-Do that this art of self-defense is specially designed for swift retaliation against the moving aggressor.

Most of the devastating maneuvers in TaeKwon-Do  are based specially on the initial impact of a blow plus the consequential additional force provided by the rebound of the opponent’s moving part of the body. Similarly by using the attacker’s force of momentum, the slightest push is all that is needed to upset his or her equilibrium and to topple him or her.

In the case of the students of TaeKwon-Do  who have been in constant practice or the experts themselves, they spend no time thinking as such an action comes automatically to them. Their actions, in short, have become conditioned reflexes. Therefore, throughout the readers will notice that repeated emphasis is places on regular training, in order to master the techniques of attack and defense 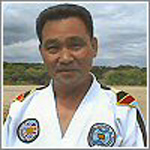 Taekwon-Do was brought into this world on April 11, 1955. Before this time, there was no Taekwon-Do, no Chonji or Dan-Gun tul; the original Taekwon-Do patterns.

General Choi was born in 1918, in a small, rural village in what is now North Korea called Ham Kyung Buk Do, Myung Chun Gun Hwa Dae Myun. When was young, his parents were concerned because his body was frail and weak, although he was independent and very responsible. The young boy, like the future General he would one day become, was strong on the inside in mind and spirit. When he was 12 years old, he was expelled from school for being an agitator to the Japanese authorities. Japan occupied the Korean peninsula at the time. His parents enrolled him in a private school where he studied calligraphy under the renowned Mr. Han IL Dong. Coincidentally, Han also happened to be a Master of Taekyon, the Korean art of foot fighting. Taekyon dates back to about 200-300 years ago because Taekyon can only be written with a Korean alphabet. The Korean alphabet was developed only several hundred years ago. But in the history of Korea, other martial arts, such as Soo Bak Gi, have been practiced since ancient times.

While General Choi was in Kyoto, Japan, he met a fellow Korean by the name of Mr. Kim Hyun Soo. Mr., Kim introduced karate to General Choi. This experience along with his knowledge of Taekyon influenced his development of the new Korean martial art of “Taekwon-Do”.

Taekwon-Do movements and techniques are scientifically designed to create power. Compared with other martial arts, Taekwon-Do is well structured, using descriptive terminology for the anatomy and physics, with well-established rules of competition.

However, Taekwon-Do is similar to other martial arts in its original purpose. Large or small, young or old, male or female, anyone can benefit from and enjoy practicing Taekwon-Do and learn to create maximum power. All the techniques and theories of Taekwon-Do are contained in a 15-volume encyclopedia originally published in 1980. General Choi not only proposed the name “Taekwon-Do”, but also developed the techniques, the terminology, and it’s system for teaching and training. His comprehensive book on Taekwon-Do allowed him to reach millions of students throughout the world. General Choi personally taught Taekwon-Do himself throughout the world, gaining many faithful students.

When World War II broke out, General Choi was drafted against his will into the Japanese army as a “student soldier”. While stationed at Pyongyang, North Korea, he planned an insurrection as part of the Korean Independence Movement called the Pyongyang Students’ Soldiers’ Movement. He was turned into Japanese authorities and was interned at a Japanese prison camp. He was freed the day after Japan surrendered, August 15, 1945, ending World War II. That was how he saved his life and began a second life.

While in the solitude of his jail cell, he practiced martial arts training with his bare hands and feet on a cold concrete floor. He promised himself that if he were ever to live in freedom, he would dedicate his entire life to building Korea’s martial arts program.

There is an Oriental expression that disaster will turn to happiness and happiness will turn to disaster. If General Choi had been a nine foot tall giant, Taekwon-Do would probably not exist. If Korea had not endured 36 years of occupation by the Japanese, General Choi might not have developed patience; the patience that enabled him to establish Korea’s own martial art. It is difficult to imagine but Japan’s attempt to destroy Korean culture inspired General to create a martial art for 20 million Koreans.

Taekwon-Do has twenty-four unique patterns developed by General Choi. Reason being is that when you consider eternity, the life time of one person, perhaps one hundred years; is only a day. Therefore the twenty-four patterns represent twenty-four hours of the day, or the lifetime of General Choi, his legacy to the human race.

The first of these patterns is named “Chon-ji” which means “heaven and earth”. It is interpreted in the orient as the creation of the universe and the beginning of human history; therefore, it is the pattern practiced by the beginner. The next pattern is called “Dan-Gun”. and as any Korean is well aware, Dan-Gun is the legendary founder of Korea. The next pattern is called “Do-San”. Do-San is the pseudonym of the patriot Ahn Chang-ho, (1876-1938), who devoted his entire life to the education of Korea and its independence movement. The next patterns are Won-Hyo”, a noted monk, and ‘Yol-Gok”, a great philosopher. Joong-Gun, the next pattern, was named after the patriot Ahn-Joong Gun. The 32 movements in this pattern represent his age when he was executed in Liu Shung prison in 1910. Subsequent patterns are Tae-Gae, Hwa-Rang and Choong-Moo, the name given to Admiral Yi Soon-Sin. The final pattern is called “Tong-IL”. Tong-IL denotes the reunification of Korea, which is General Choi’s lifetime wish.

As I speak of the origin of Taekwon-Do, I must mention the period of Japanese occupation of Korea. It was a time of great hardship for the Korean people. It is not my intention to offend our neighboring country, but this period deeply influenced General Choi and the development of Taekwon-Do and I am compelled to discuss its impact.

From 1946 to 1954, General Choi studied and developed this new Korean martial art. On April 11, 1955, General Choi convened a meeting of prominent Koreans including leaders in Congress, politicians, military Generals, historians, artisans, and martial art experts, for the purpose of naming this art. General Choi proposed the name “Taekwon-Do” and it was unanimously accepted. These were the circumstances under which Taekwon-Do was born and became Korea’s new martial art.

In 1961, Taekwon-Do spread to colleges, government offices, and police academies. This started a real boom in the expansion of Taekwon-Do. Finally, in 1965, Taekwon-Do became the official Korean national martial art. The International Taekwon-Do Federation (ITF) was founded on March 22, 1966. The original member countries were; USA, West Germany, Italy, Egypt, Turkey, Malaysia, Singapore, Vietnam and Korea. The ITF was the first international organization headquartered in Korea.

Unfortunately, Korea was governed by several military dictatorships for a period over 30 years. This marked the beginning of a period of trials for Taekwon-Do. Using the name of Taekwon-Do, many phony organizations appeared as political tools, cheapening Taekwon-Do into a commercial sport.